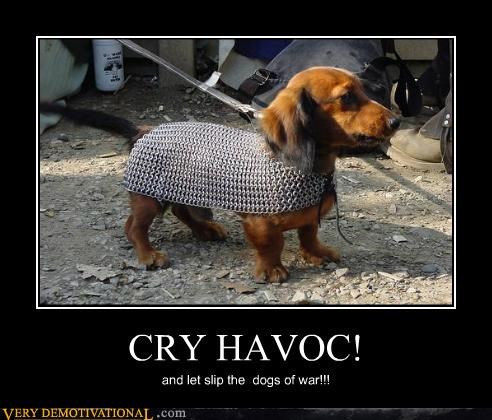 I have been asked for a recap of the events at NAR Midyear, but as I did not attend the Board of Directors meeting, and as I was busy doing other things, I felt it wasn’t really my place to give a recap.

It is, however, my place to offer some thoughts — high-level, unusual, and either prophetic or batshit crazy depending on your point of view — on what I heard, saw, felt, and read this past week. And my overall impression right now is that war within the real estate industry is inevitable. It is a question of when, not if, and how, not why.

The “why” has already been answered by the Greek historian Thucydides, who wrote:

The growth of the power of Athens, and the alarm which this inspired in Lacedaemon, made war inevitable.

Similarly, the growth of the power of the Internet, and the alarm which this inspires in various circles in real estate, makes war inevitable. While I hope to see the minimum of conflict, and will work to make peace wherever I can, at this moment, I remain darkly fearful that we will need to fight in order to resolve the only question that matters: who shall rule?

As I wrote on my previous update, the main controversy to come out of the MLS Policy Committee was what to do about MLS public facing websites.

Well, as I reported, after some debate, the Committee approved a pretty strong measure designating the creation, promotion, and maintenance of MLS public websites as a Basic Service. (I had recommended to Committee members that they change the word “website” to “electronic communication” to cover mobile apps and other usage, but I gather that probably did not happen as events overtook things.)

Turns out, as has been reported by Inman News, the Executive Committee had other thoughts:

NAR’s Executive Committee has pulled language stipulating that the “establishment, maintenance or promotion of public-facing websites” be included on a list of services that MLSs should be allowed to define as “basic,” according to NAR Director Shad Bogany, chairman of the Texas Association of Realtors.

That action by the ExCom led to predictable cries of protest on Twitter and elsewhere.

Newsflash NAR & the largest brokers side to make the small brokers obsolete. Doing away with public websites is the wish #narmidyear

I’m sure the politicking in the hallways and bars of the Marriott Wardman hotel was fast and furious. Dan Frank said on Twitter that the Texas caucus was furious.

Well, the long and short of it is that the pro-MLS public website folks won that round at the Board of Directors. The MLS Committee Policy was passed as written. The MLS can have public website funded by dues dollars, even if a broker doesn’t use them.

Big Brokerages vs. the MLS

What will be the reaction from the large brokerages who oppose MLS public websites? Somehow I doubt they’ll shrug, clap each other on the back, and say, “We gave it the good college try, my dear fellows. Time to yield to the wishes of the majority.” Read what the Realty Alliance actually wrote in its letter:

We are troubled that some MLSs seem to be losing focus on their original purpose, and that outside consultants are encouraging them to expand their mission beyond their “core” functions, which often puts them in competition with the firms for whom they work.

Those don’t sound much like the words of people much interested in yielding to anything at all. They also don’t sound much like words of folks who are just concerned about spending too much money on websites. Then consider what Craig Cheatham of Realty Alliance said about the Board of Director decision to approve the MLS public website as a Basic Service:

Craig Cheatham, president and CEO of the Realty Alliance, an association of 70 U.S. brokers, said he was disappointed by the board’s vote.  The debate became a referendum on whether or not MLSs should have public-facing websites rather than focusing on whether the policy itself was sound, he said.

He predicted lawsuits and disputes would arise from within the industry because of questions regarding tying the MLS website service to MLS participation given that public websites are now classified as a basic, not optional, service that MLSs may oblige members to pay for regardless of use. [Emphasis added]

Given that brokerages have the absolute power to withdraw listings from MLS public websites without withdrawing them from the subscriber-only part of the MLS, I assume that is one dispute that will arise. Companies willing to pull their listings from sites that get 50+ million monthly uniques (Zillow) aren’t likely to be worried about pulling them from sites that get far, far, far less (MLS public websites).

The minute large brokerages do so, of course, the accurate data advantage of the MLS public website goes out the window. Hard to claim you’ve got the most accurate, up-to-date listing info out there if large brokers who control 30% of your listings have pulled out.

And that’s without talking about lawyers getting involved.

Consider the events of the past few days from the point of view of the MLS executives. I personally saw a few of them exit the MLS Policy Committee meeting with grins, congratulating each other on having achieved a significant victory. They were elated.

Less than 24 hours later, they hear that the NAR Executive Committee wants to strip that policy out of the package of reforms. Whatever hard work they’ve done working with the MLS Policy Committee, hard work they thought had paid off, is undone in a couple of short hours.

Do you think they might be a little bit annoyed?

One of the general tones/attitudes I have picked up from MLS people over the last couple of years is an overall dissatisfaction with NAR itself. NAR rules govern almost all of the MLS’s in the country, but the MLS’s themselves have very little direct say in those rules. The MLS Policy Committee, for example, is made up of 118 members. Most of them are REALTORS with no real experience operating an MLS. The current President of Council of MLS and the President-Elect are not on the MLS Policy Committee. Some of the most experienced MLS executives — the most obvious choices if one wanted to make policy regarding MLS’s — such as Bob Hale, David Charron and Russ Bergeron are not on the Committee.

In fact, one might look at the very fact that an organization like CMLS exists and wonder why such a thing might be necessary if the MLS’s were all happy and thrilled with NAR.

The Power of Athens, And the Alarm of Lacedaemon

The value equation has flipped.

Lest you think this is just me being Notorious, here are the words from the REThinkFuture 2013 Overarching Themes Report:

Re-evaluate organized real estate. It is declining in value and relevance to industry professionals.

And of the seven most often mentioned “crazy ideas” from the REThink report, two mention the MLS directly, one suggests eliminating three layers of Associations, and one goes on and on about listing aggregation. In one section directly dealing with what NAR itself should do, a prominent suggestion is to consider creating a national MLS.

Still think this is me just being dramatic? Go get your local Association Executive, take him out to a bar, do a few shots of Jameson’s, and once he’s feeling very comfortable, ask him what percentage of the members the Association would lose if the MLS went away.

That changing dynamic between the MLS and the Association which gave birth to it is the underlying cause of today’s tension. Today, the issue was public websites. Yesterday, it was franchise IDX. Tomorrow it will be something else. In each case, NAR and the Associations assert their power to rule, and in each case, the MLS’s chafe, rightly or wrongly. And with each conflict, the ultimate question looms larger and the day of reckoning draws closer. Who shall rule?

The theme of growing power and the alarm it inspires applies with even more force to the other decision-with-fireworks that happened on Saturday. Once again, we turn to the great work by Andrea Brambila of Inman News:

The day before, he [Dale Stinton, CEO of NAR] had declared NAR leaders were “ready to get into trouble“ by considering controversial issues surrounding the trade group’s structure — including changing its relationship to realtor.com. Members taking part in NAR’s REThink Initiative about the industry’s future suggested NAR “take back realtor.com” and revamp it to compete with other national aggregators. Stinton responded that “maybe realtor.com needs to get sorted out and maybe that will happen here at the board of directors meeting” on Saturday.

Well, on Saturday, we heard about impassioned speeches from the floor of the Board of Directors about unleashing Realtor.com.

Comment from floor, "We must cut the chains and let http://t.co/RSqPINwiRV soar. We need to compete!" Loud applause! #NARmidyear

Most fun of all, one comment synthesized the two big issues — taking on “third party portals” and the MLS public website — into one:

Good news from #NARmidyear. Pub sites the way to win consumer back from Zulia. Empower the MLS and you empower the broker, big or small

I will certainly have more comments on this one in my Q1/2013 Report on Move, Trulia, and Zillow (which will now be pushed out another day or two to take these latest developments into account), but off the top of my head, a few thoughts.

One, the results of the closed door meeting might bode very well for Move. I pointed out in my 2012 Report that one of the biggest strategic issues for Move was the lack of control it had over the brand of Realtor.com. If that gets fixed, and especially if Move is given carte blanche (as opposed to having to go back over and over again to NAR to get permission for something else it wants to do), then that could be significant.

Two, it is absolutely unclear to me how much the rank-and-file membership of NAR feels that “Realtor.com” represents the “us” vs. the “them” of Trulia and Zillow.

And while Realtor.com will be huddling with NAR leadership to have its chains removed, Zillow will be spending large sums of money on brand advertising… which is driving traffic in measurable enough ways that Spencer Rascoff is very comfortable telling Wall Street that it’s working.

I suppose Yale might loosen up its recruiting standards and compete against Alabama for the NCAA Football title. One day. It might even happen soon. Who knows? But I have to admit it ain’t that close between Yale and Alabama in terms of football today. (Now, squash and ice hockey, we’d kill the Crimson Tide….)

Nonetheless, this war may be inevitable as well. The growing power of the Internet generally, and of Trulia and Zillow specifically, inspire alarm in NAR, in the brokerages, and in the MLS. Diplomacy might yet work, since both Trulia and Zillow in public statements have done everything possible to kneel and kiss the ring of NAR, brokerages, and MLS’s. Perhaps deals may be struck that avoid open hostilities and lead to peaceful coexistence. Maybe things are so far gone that simple deterrence might work.

But then, none of those might work if the fundamental question is the same one as between Athens and Lacedaemon: who shall rule?

Over the next few months, I hope to make some suggestions geared towards peace, trade, and coexistence. But I cannot provide answers to the fundamental question. Only time and events can answer that question.

Things are going to get interesting.